For some time now, most urban areas in Ireland have been inundated with leaflets, stickers or plastic bags from alleged charities who want your old/second-hand clothes, shoes, linen and, in some cases, toys and more expensive items.

Most, if not all, of these are operated without a licence (you need a door-to-door waste collection permit to operate in this fashion), are publishing false details on their leaflets/stickers (invalid charity numbers, non-existent websites/phone numbers), and are publishing deliberately misleading statements (such as pretending that your clothes are going directly to 3rd world destinations, or that they are a charity). Even more sinister is that many are run but some pretty significant criminal gangs.

Such is the significance of the problem that a website has been dedicated to highlighting the issue. It’s ClothingCollection.org run by Donncha O’Caoimh. He also has a good post explaining the issue on his own blog.

Being no stranger to most flyers that are seen on ClothingCollection, I came upon a strange twist today. 2 stickers arrived having been hand-delivered by the same chap at around 5.45am. In challenging times in illegal / fake charity collection, it appears they’re doubling up on resources!

Some action against these gangs (TCM report: Girl, 17, in court for bogus charity collection) has happened, but much too little, in my opinion.

The 2 stickers delivered were for, as discussed on ClothingCollection, Second Hand Rose and Second Life: 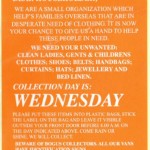 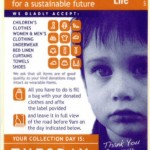 Thomas Geraghty
Aug 20th, 2008   6:03 pm
Interesting, I did come across a fake charity collecting outside Supervalu before, a woman challenged them for their license and they just said nothing and drove off. Turns out they were drug abusers from Dublin who broke into a local shop that night.