A few years ago, I bought a DSP-500 USB/digital headset from Plantronics. It’s served me well with only some minor software glitches.

It has a swivel microphone on it that has obviously only just about stood the test of time. The swivel action took its toll on my headset, and other seem to suffer the same result as well. I set about fixing mine (or at least to see if I could fix it), to save me ordering an other headset. Here’s how to disassemble the headset (assuming you have a similar fault).

Update: As requested (quite some time ago!), I’ve added photos of the wiring in the sound-card circuit-board (that bulky Plantronics-branded box that’s inline, just above the USB plug. The wire colours are listed below, and are top-down as you’re looking at the circuit board with the printed text the right way up (i.e. “Copyright Plantronics” is down the bottom-left of the board).

Click on the images (and then click the image on that page, again!) to see larger versions: 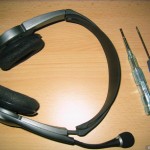 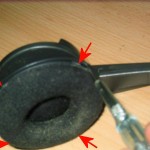 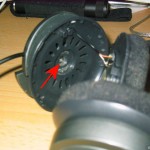 Step 3: The exposed inner screw of the earpiece 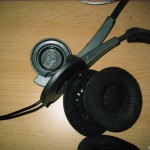 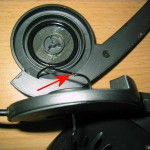 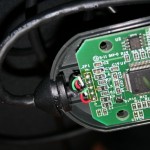 Extra: USB plug, left-hand, side of DSP-500 circuit board 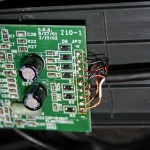 Extra: Headset, right-hand, side of DSP-500 circuit board

Martin
Feb 14th, 2009   9:06 pm
Thanks, Saved me some time finding how to disassemble! Exactly the same fault with the broken microphone wire. The core of the cable does indeed contain plastic threads and also the wire seems to be coated like enamelled copper wire. However this melts off during soldering. Thanks. Martin

Kenneth Jeffrey
Feb 23rd, 2009   5:40 am
thanks for the pictures my mic stopped working and I was able to follow your directions to check my wiring. I've been using these headphones for 5 years or more now and they still work great. I tripped over them earlier tonight and the mic stopped working. I was able to find that some wires pulled loose in the sound card but am unable to find a wiring diagram for them. I was wondering if you happen to have any pictures of that part of the device. If you do and could email them to me I would greatly appreciate it. I have been unsuccessful finding anything online. thanks Kenneth

c.far
Mar 5th, 2009   8:19 pm
i have an even older pair of basically the same model w/ the exact same problem, cant solder it yet but this info is gonna make fixing the mic alot easier thanks for the post

Alan
Mar 12th, 2009   2:42 pm
Hey, thanks for posting this. I was about to destroy the headphones by trying to enter from the wrong side until i saw your post explaining where the clips were.

cgarvey
Mar 25th, 2009   6:29 pm
Kenneth, I don't have easy access to the sound-card bit of the headphones, I'm afraid. I've been meaning to grab a photo since you commented, but haven't had the time to dig it out (it's tucked away with about 100 wire ties). I have opened it, twice now, to repair it having pulled the wire loose like you. I didn't have to solder it (there's a sticky black tape over the soldering that was good enough in my case). I hadn't pulled the wire completely loose (just 2 of the cores had disconnected), and it was obvious where they went back. I'll try a get a photo up soon, but it won't be this week, I'm afraid.

Sumair
Apr 21st, 2010   8:38 am
I have the same problem as cgarvey. I opened the piece and there were three wires stuck out. There are a total of 9 wires altogether. Now i dont know which wire belongs to which circuit. Can somebody help me out on this? A good photo would do, i guess

cgarvey
Apr 21st, 2010   1:32 pm
Normally, I'd quip "ask, and thou shall receive" but I noticed I'd already promised a photo over a year ago. Humble apologies, and I'll get on that right away.

cgarvey
Apr 21st, 2010   1:54 pm
As promised, photos and pinouts of the sound-card circuit board. Apologies for the delay! Pay attention to the order of colour listings above (top-down as you're looking at the circuit board with the text the right way up). You'll need a good, bright, white light to be able to distinguis the colours of the headset wiring!

Konstantin
May 31st, 2010   11:08 am
I have successfully repaired my Plantronics Gamecom Pro1 after reading your post. Thanks a lot!

Overkill
Aug 11th, 2011   11:00 am
Gamecom Pro = DSP500 rebranded, for those of you who don't know. Thanks for the post, repaired my age-old headset with the pics...needed fix the wire going from sound card to L earpiece, but the damaged wire was inside the earpiece. Splice & Dice!

Tim
Jan 31st, 2012   7:33 pm
Thanks, this helped me fix my Gamecom Pro's bad right speaker. I don't know if I would have figured out that the foam ear pieces popped out without damaging them were it not for this. I had a break in the red wire somewhere near the left speaker so I cut a few inches off and resoldered all 5 wires back to the circuit board inside the left ear. It's great to have my favorite headset back.

Russell
Jul 10th, 2012   2:21 pm
Awesome write up! Mic stopped working mysteriously last night when I swiveled it down and I thought for sure it was finally time to replace my venerable DSP500s. Googled DSP500 repair first thing this morning, 20 minutes and some solder later, good as new (and no more swiveling the mic!). Thanks again!

codlike
Oct 20th, 2014   4:23 pm
I had thrown them out, well gave them to my dad, then he finally didnt want them, i had a quick google before throwing them out, found your page. A not too messy soldering iron session later and there as good as new. Your dissassembly instructions were great. Thanks x

Christian Christiansen
Apr 22nd, 2021   12:24 pm
Thanks for the great writeup+pictures. Helped me a lot when I fixed mine. Soldering the wires caused me a bit of trouble, but as it turns out, this is enameled (plastic coated) wire which is apparently often used in audio wires. Putting too much heat on the wires can damage the insulation beyond the intended area, so using flux/soldering paste can be helpful. Also, I ended up not putting the plastic shielding back on the microphone swivel boom, as this allows the (now exposed) mic wire to move more freely, which seems to put less strain on the wire when swiveling the mic boom.